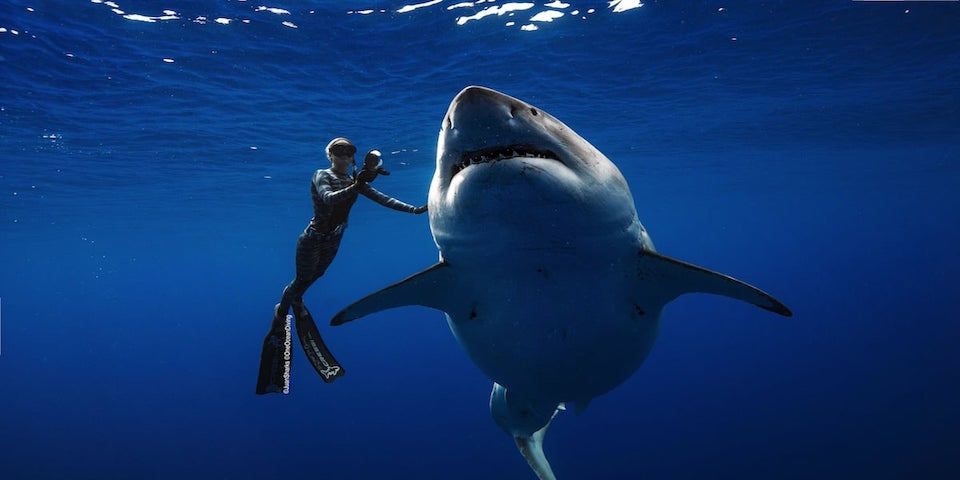 In January 2019 news broke about shark conservationist Ocean Ramsey diving with a giant shark. The story soon went viral worldwide as it turned out that this was no ordinary shark, this was the already world famous Guadalupe female shark, Deep Blue! Sighted now in Hawaii feeding off a sperm whale carcass and gaining media hysteria, we look back on the story and clear up fact from fiction.

The first official record of Deep Blue is from 1999 when a few photographs were taken of her during that year at Guadalupe Island, however at this time she was not the enormous size she is today. She became truly famous in 2013 when she was next documented by a number of photographers, again during the Guadalupe Island shark season. The footage of her circling a dive cage went viral and a star was born! She was also filmed the same year by Discovery channel for the shark week documentary “Jaws strikes back” were she was tagged by Mauricio Hoyos and Greg Skomal. In the years since she has been spoken of on almost every dive trip with us and we even produced a documentary around her story for the shark week show “Great White Abyss” in 2017. She had almost become a legend and we wondered if we would ever get a chance to see her again. Then January 2019 came around and news broke of her being sighted once more, this time in Hawaii!…..

So much has now been written about this story in the media so we thought we would present the facts of the story as it unfolded. On January 13th 2019 conservationist and dive guide Ocean Ramsey and her dive team were studying tiger sharks that had been attracted to a dead sperm whale carcass 9 miles off Oahu. Much to the teams amazement an enormous Great White shark turned up and also began to feast of the whale however, this was not just any Great White shark, this was Deep Blue! She was positively identified due to her size and unique markings and scars.

Then on Tuesday 15th, something just as amazing happened. Whilst back out at the whale carcass, Ocean and her team encountered another giant Great White shark, possibly even larger than Deep Blue! After spending many hours free diving with her and documenting the most incredible images, it did not take long for the media to pick up on the story and make international news! The second giant shark was a new animal and became know to the world as “Haole Girl.” One other Great White shark was observed during this time but after these particular days, none of the animals were seen again in the area. The story however, was about to go viral…….

For the next week the story appeared in almost every media outlet. Ocean and her teams social media went viral and people even began flocking to Hawaii in an attempt to catch a glimpse of this now famous creature! The story of this beautiful shark conservationist, free diving with one of the largest ocean predators as it fed off a whale carcass quite rightly captured the worlds imagination and sense of wonder. Due to Oceans love of sharks and her passion to educate the publics opinions, she was able to spread a positive message about the importance of sharks, their misconceptions and the threats they face in todays climate. On the flip side she also attracted some negative attention by some claiming her act was reckless and gave off the wrong impression about sharks and how one should behave around them in the wild. Whatever your opinion on the topic, the fact remains that this was a huge global story and has put Deep Blue (and the now just as famous Haole Girl), firmly into the public spotlight.

Although our team has yet to meet either Deep Blue or Haole Girl, we are pleased to hear news of their survival in the ocean and perhaps one day one of these magnificent creatures will grace us with their presence whilst operating at Guadalupe Island………the search for Deep Blue continues. …….