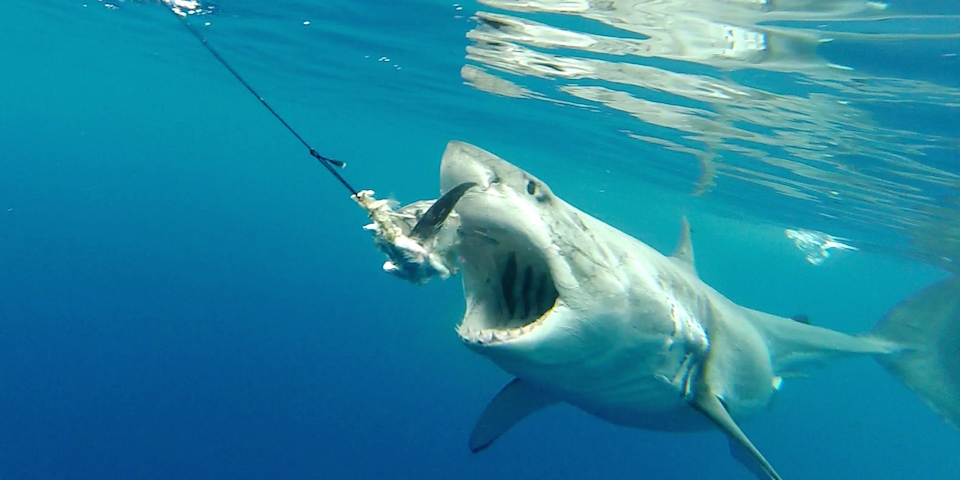 As we move into mid October at Guadalupe Island the water temperature remains high as do the shark numbers. Very much still the "boys club" at the moment, we are encountering some huge males of whom we are getting to know very well...........

Typically as we move into fall at Guadalupe the air and water temperature begins to cool slightly and usually around this time we begin to see the arrival of the huge females. This season seems to be slightly different as due to warmer than usual temperatures, we seem to be seeing September conditions continue into mid October. The good weather and great shark numbers (still mostly males) are ongoing as we reach this part of the 2015 season.

During the opening day of trip 5 we where visited altogether by an impressive 9 sharks in total including “Hooper” and “Sad Face” who both put on a great individual shows right in front of our guests. I always tell our divers before the trip departs that their experience is down to which individual sharks visit the boat as every shark has a unique personality and behaviour around the boat. It is not a numbers game as having 10 shy sharks is a very different experience to having 1 or 2 bold and confident individuals. During day 2 we got  to meet a very big personality we immediately took a liking to. Only 4 sharks visited us on this day however one big male we have nicknamed “Islander” completely stole the show. At 14ft in length with an unmistakable broken dorsal fin, he kept our divers entertained for most of the day. A star was born and we would see this big boy again into trip 6…….

Trip 6 got off to a excellent start with 9 sharks seen on the first day which included “Hooper” playing on the surface, “Islander” around for most of the day once more, “Seamus” making a brief (but memorable) appearance and “Sad face” with a late show at the end of the day. Day 2 we had heavy rain throughout however the shark action was red hot! We had some amazing submersible cage dives with between 4 – 6 sharks circling our divers at a time. Both “Sad face” and “Islander” where back plus “Andy” a very inquisitive 12 ft male named after Discovery channel and shark Week presenter and cameraman Andy Casagrande. Waving us goodbye as we pulled the cages onboard on the 3rd day where “Seamus”, “Sad face”, “Andy” plus another unidentified female……….

Trip 6 marks the end of our first half of the regular season schedule. It has been an amazing season so far with between 40 – 50 different sharks seen plus some of the biggest males we have ever encountered since diving began here. As we take a short 2 day break before embarking on the second half of the season ahead of us we are looking forward to still so many sharks yet encountered……including those big females who cant be too far away now……….