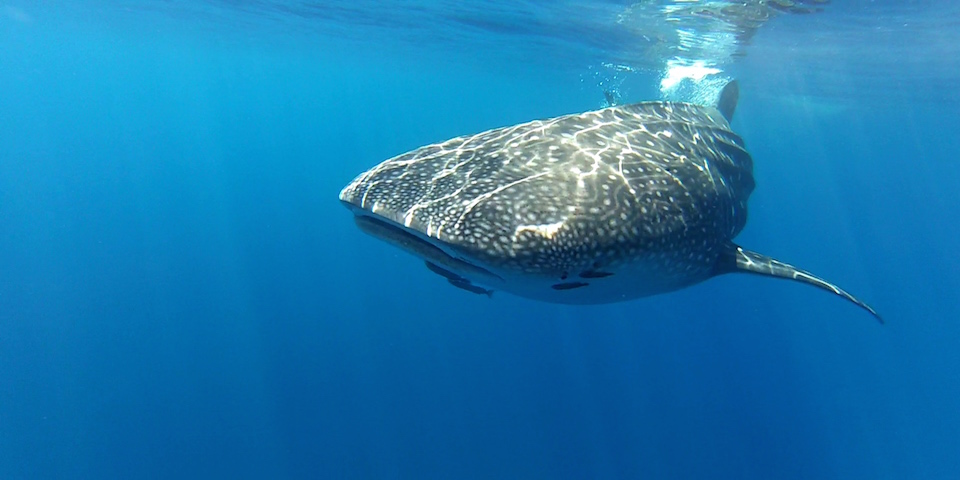 After an amazing start to the season we kicked off trips 3 and 4 taking us from late September into early October. Guadalupe is full of life at this point. As well as the numbers of white sharks being very strong, our guests had once in a lifetime encounters with some very interactive whale sharks!

The fine weather and excellent shark numbers typically continue throughout September at Guadalupe and this year was no different . Although we have began to see a few females, it is still definitely “the boys club” at this point. As we go into early October it usually makes for varying wildlife encounters as the weather turns slightly cooler, however this year it has been very warm and that has made our September conditions overspill into October…

With more returning guests onboard, trip 3 got off to a flyer! 12 sharks on the opening day with plenty of regulars making themselves known to our guests. “Cream puff” and “Amiria” where back plus “Nacho”, “Atlantis”, “Horizon” and a shark we are getting to know very well……”Sad Face”. Day 2 and Guadalupe regular “Johnny” put on a great display around midday but the real excitement came when late into the afternoon we had a exciting encounter with a smooth hammerhead shark. Interactions with these sharks are rare as they typically keep their distance when in the same vicinity as white sharks. This bold female flew by the cages weaving in between 4 white sharks which we had around the boat at this point. 19 white sharks in total plus 1 hammerhead made for an excellent 3rd trip.

Wondering how to top a hammerhead shark, little did we know that during trip 4 we where about to do it in style! Just over an hour into day 1 out of the corner of my eye I saw a 25ft whale shark swimming down the starboard side of the boat showing off its beautiful markings before moving off into the blue. Guests where blown away as for many, seeing a whale shark alone is a once in a lifetime sighting. Throughout the rest of this special trip we saw 21 white sharks including “The Legend”, “Sad Face”, “Hooper”, “Sydney” and “CoriB”. The whale shark sightings did not stop there however…..during the 3 days on anchor we where visited on 4 different occasions by a number of these magnificent creatures including one very interactive individual who “mouthed” one of our cages coming within touching distance of our divers! Incredible. In 6 years of running trips to Guadalupe SDX has never seen a whale shark….on this trip we had multiple unforgettable encounters!

Typically as we go into mid to late October we begin to see cooler weather and the early arrival of some of the mature female white sharks…….lets see who or what else is going to turn up as we head into this time of the season…….