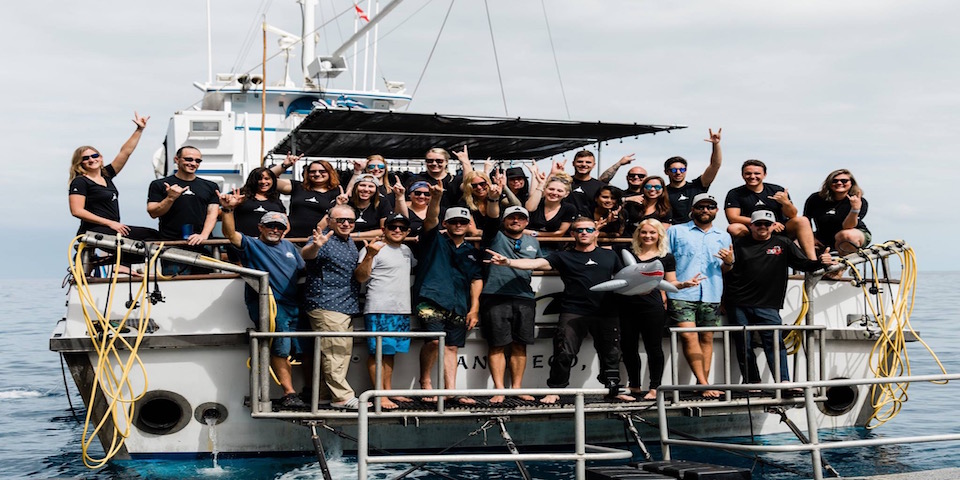 2017 was our biggest season ever running trips to Guadalupe…..could 2018 be even bigger!? You bet it could! We scheduled 14 trips in total running later than ever before into the season and just a few days before Christmas! Returning guests, “shark celebrities”, new sharks as well as some of our favourite big females plus a 10 day film shoot. 2018 had it all………

Guadalupe is now number 1 in the world

Both 2016 and 2017 had been excellent seasons at Guadalupe for our team and its resident sharks. 2018 continued as we had expected and has now cemented Guadalupe as being the premier destination in the world today for encounters with these fabulous giant predators. As predicted, September – October saw great numbers of sharks (some trips counting up to 30 individuals!) as well as fine weather. As November arrived we began to see cooler days and right on cue, the return of the Islands big females. Of course with Great White sharks, no two trips are ever the same and it was fascinating to be still seeing sharks we had encountered throughout the year still playing on the baits as late as Dec 20th.

This year saw the return of many of our regular guests who we are now becoming good friends with as well as seeing many, many new and enthusiastic shark divers. Gone are the days of these trips being exclusively for serious scuba divers and professional photographers. This year we had more diverse people than ever before, more single women travellers than ever before and a much bigger average age range. The word it out..Guadalupe is THE place right now to get your shark fix!

This year we were also joined by some very exclusive “shark celebrities.” First onboard was shark attack survivor Paul De Gelder. Paul has turned his life around after his attack over 10 years ago and has since gone on to become a shark advocate and regular on Discovery channels’ shark week. Paul was a superb guest and we look forward to having him back onboard this coming season. Next up was acclaimed cinematographer and shark expert Andy Casagrande. Andy put together an exclusive charter in collaboration with Dr Maurico Hoyos. It was a huge success and was a brilliant mix of research, “cinema science” and eco tourism. Speaking of research, Neil Hammerschlag from the university of Miami shark lab joined us for what turned out to be one of the best trips of the season as did independent filmmaker Skyler Thomas who was lucky enough to encounter one of our most famous sharks “Lucy.” (more on her to follow)

The return of the big females

Of course it was business as usual shark wise with the return of many of our favourite sharks including Paul Walker, Leslie, Johnny, Geoff, Mau, Drogin, Meli, Livvy, Andy, Kenric, Luca, Sad Face, Donna, Jenni, Mikaela, Walter Whiteshark, Pierre, Chelsea, Jasper, The Squirrel, Slashfin, Lady Bolton, Rogov, Harley and Ropey. Not only this but we also identified more new sharks this season than ever before! With so many old sharks returning each year and now so many new ones turning up each season, things are looking good for the Guadalupe Great White shark population!

The real story of the season however was the predicted return of the mega sharks! Some of our favourite big females seem to return every other year to Guadalupe and of our favourites we saw the return of three of the biggest and best there is….. First to arrive back at the island was the famous “Lucy”. We love this big female and of all the mega sharks, “Lucy” is the animal that we have seen more than any other, making us particularly fond of her. She appeared mid season and we had her for a total of 4 trips. Next to arrive was “Dotty”. Different in temperament to “Lucy”, she is much more fiery on the baits when she arrives. Again, we saw this animal mid season and she did not disappoint. Last but by no means least was “Scarboard”. This shark is an all time classic. At 18ft and with incredible girth, she is a once in a lifetime sighting and although we only had her with us for one day, it turned out to be the best day of the year and one of the best our team has ever had since operating at Guadalupe!

Later than ever before

As we got into December we had two very special trips scheduled. First up was a Discovery channel charter as the team from last year returned to continue our search for the world famous “Deep Blue”. Although we cannot give away any plot details, we can say that we filmed some incredible dive sequences as well as behaviours never witnessed before. Tune into shark week 2019 to see what the team managed to capture. Just when we thought the season was wrapped up, acclaimed wildlife photographer Amos Nachoum exclusively charted the boat for a highly enjoyable final trip of what had now turned out to be the biggest season to date!

What a year! After a few months rest for our team, we are now beginning to take bookings for our up and coming 2019 season! Guadalupe…..premier shark diving location in the world. Come join us this year – info@sharkdivingxperts.com