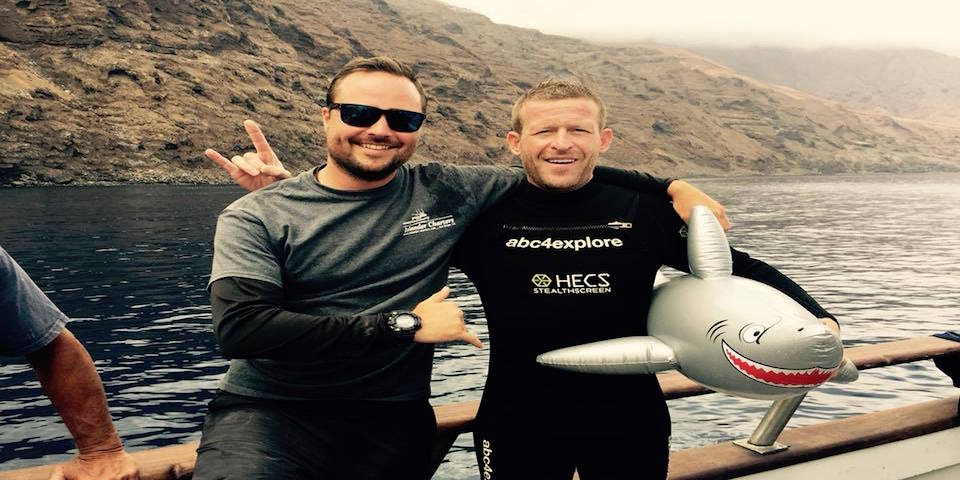 In 2018 Acclaimed wildlife cinematographer, shark advocate and television presenter Andy Casagrande hosted a 5 day exclusive Cinema science expedition alongside our team which turned out to be one of the best trips of the year! Andy brought a group of shark enthusiasts along with his wife Emma and managed to film sharks in a unique way using his and Mauricio Hoyos’ fin cams.

We first met Andy in 2013 when Jimi was working alongside Chris Fallows in Cape town. Andy was filming a segment for the acclaimed series “Shark” for the BBC. Later that year we helped Andy and the BBC production team again for logistic in documenting Great White sharks at Guadalupe for the same series. In 2014 we worked with him on two major shark week documentaries “Island of the Mega shark” and “Return of the Great White serial killer” and since then we have collaborated each year on various projects. Andy had always expressed interest in running an exclusive private charter with our team during the Guadalupe season. 2018 was finally the year to pull off this unique and exciting trip!

To make this charter exclusive and unique, Andy teamed up with researcher Mauricio Hoyos to help aid his science and behavioural studies on Great White sharks at Guadalupe. Andy brought along his fin cams, a non evasive device that can be attached to a sharks’ dorsal fin fully equipped with a GoPro. Once successfully mounted, the GoPro will film for multiple hours and document the animals behaviour, swimming patterns and any interaction with other wildlife.

After spending the first few days enjoying sharks from the cages and Andy giving speeches and classes on photography, the final day was spent attempting to attach a fin cam to a shark from the safety of Mauricio Hoyos’ independent research vessel. After many attempts, Andy finally managed to secure a device onto a large male shark and document the shark behaviour for the following few hours.

A hugely successful expedition that we hope to repeat with Andy in the future. For information on our exclusive trips just get in touch! – info@sharkdivingxperts.com