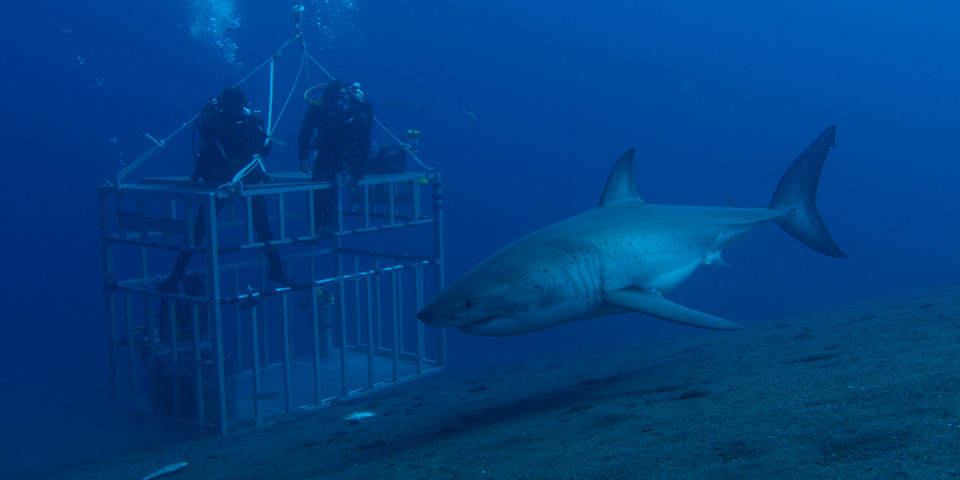 2018 saw the 30th anniversary of Shark Week and what better way to celebrate than by releasing “Great white abyss” to high critical acclaim! Two years in the making, with a huge budget and some very ambitious goals in mind, we are extremely proud of what the team filmed and produced. Here we take a look back and give you an insight into the abyss…….

The original premise for “Great white abyss” started back in 2016 when a shark named “Shack” was recorded in New Zealand diving to incredible depths for long periods of time. Then, with the media interest surrounding “Deep Blue” (the famed mega shark from Guadalupe who has only been sighted a handful of times) we began to ask the questions – How is it possible that these giant sharks are spending so little time at the surface? If they are indeed staying deep out of sight, then what are they potentially doing at such incredible depths?

To try and answer these questions an expedition like no other started to take shape as we focused our attention on the deep waters surrounding Guadalupe Island. It was here that our team and Discovery channel wanted to explore and search for mega sharks such as “Deep Blue.” But not only that, we also set out to film great white sharks deeper than ever before and hopefully reveal some new insights into the behaviours of these elusive giant sharks, that seemingly stay hidden in the deep most of the time.

Jimi Partington and Brandon McMillan teamed up with Dr Mauricio Hoyos and Andy Casagrande for this exclusive adventure. With the backing of an amazing production team and the crew of the M/V Islander, we prepared for an ambitious and bold mission into the abyss. With almost two years of pre production preparation behind us, we set sail in December 2017, excited, nervous and full of wonder for what we were about to experience and document……

It was one of our teams main goals to attempt to put a cage on the sea floor of Guadalupe for the very first time. Of all our prep work for the show, this idea was the most challenging. With deep water drop offs, unpredictable deep sea currents plus ever changing weather conditions, this had to be planned and executed with extreme caution and professionalism. We managed to pull it off in style as Jimi and Brandon (alongside Andy and safety diver Nick) documented great numbers of sharks on the sea floor as well as a couple of very big females. Of all the sequences in the show it was this particular scene that our team are most proud of due to the fact that it took so much preparation and skill to achieve safely and successfully. An amazing experience that we hope to repeat one day.

After seeing mature female sharks in the depths during Jimi and Brandon’s deep cage dive, the team now wanted to try and tag one of these individuals to find out where exactly they were spending most their time. Mauricio often free dives with the sharks at Guadalupe in order to successfully tag them. He typically does this near the surface however, our bigger sharks were seemingly staying down in the depths so for the first time ever Mauricio would attempt to free dive at depth and tag one of these giants. With Andy filming him (and watching his back!), Mauricio became the first person in the world to successfully free dive and tag a great white shark at depth. Amazing.

Next up was an experiment that took inspiration from towing small Cape fur seal decoys in South Africa. This technique is used off Cape Town to induce an attack from a great white and showcase their power and hunting strategy. The great whites at Guadalupe however are thought to hunt bigger prey and at deeper depths than those in South Africa so with this in mind, we constructed the first ever full size elephant seal decoy that could be towed at depth in an attempt to lure one of these mega sharks up from the abyss. Nicknamed “Hudson,” the decoy experiment was another success and after towing in an area that we had identified as a “shark hotspot” it did not take long for a number of sharks to take interest in the him. One extra large individual hit the decoy so hard that it broke away from the boat and we thought we had lost “Hudson” for good……that was until we introduced our final bit of technology to give the show an amazing and unique finale…….

For the first time ever, our crew teamed up with the charity organisation “Fins Attached” and its research vessel “Sharkwater” owned by conservationist Alex Antonio. Onboard the Sharkwater was one particular very impressive piece of equipment that would allow us to go even deeper into the world of the great white shark….a two person deep sea submarine! Once we had filmed the deep cage dive, the free dive and the seal decoy, the Sharkwater arrived at Guadalupe alongside the Islander and preparations began for exploration of Guadalupe Island’s surrounding waters. To say we where excited was an understatement!

First in the submarine was Andy, who during this initial “test run” was interested in trying to locate “Hudson”, our lost elephant seal decoy. After 30 mins of diving in the vicinity that we lost the decoy, Andy and submarine pilot Randy had found him! “Hudson” was retrieved in tact (although he was now sporting some impressive shark bites!).

The following day it was Jimi’s turn in the submarine. Jimi wanted to go deeper than ever before and film behaviours of the larger sharks on the bottom of the ocean. His wish was granted in style as once was he was on the bottom at around 400ft, he was soon completely surrounded by sharks ranging from 12 – 18ft! The sharks behaviour on the bottom was very different to that on the surface. The main difference was just how comfortable they were with one another and not long after…how comfortable they soon became with the submarine! In one of the most exiting scenes, Jimi filmed mega sized great white sharks bumping the glass dome of the sub and worried for the equipments safety, had to swiftly return to the surface! A once in a lifetime experience no doubt.

With time for one last submarine dive, Mauricio went deeper than ever before (this time into the darkness of 1000ft!) to try and record sharks at this incredible depth. After a long wait in the pitch black, a large figure finally revealed itself in the distance. With the spotlights shining on the creature and Mauricio in pursuit, he managed to film one of the largest great white sharks seen on this expedition, asking the question “could it have been “Deep Blue, or a shark of similar size”?! A wonderful and thrilling climax to an amazing expedition.

The mission was complete but the team see this as just the beginning of our adventure exploring the waters of Guadalupe. Who knows what other mysterious the Island is going to reveal in the future. We hope that we can pick up where we left off and collaborate with this amazing production team for many years to come as we attempt to dive deeper than ever before into Guadalupe Island’s great white abyss…….

For a link to the show – www.discovery.com/sharkweek