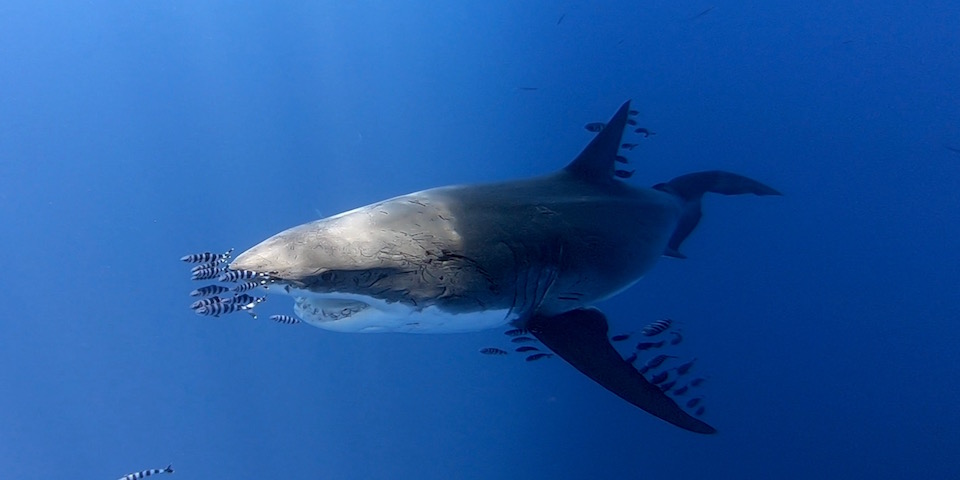 Lucy is no ordinary shark. As well as being a member of Guadalupe Island's “Mega sharks” club, she has been seen by our team more than any other of the big females making us particularly fond of this old girl. At 16ft and with a distinct broken caudal tail fin, she is one of the easiest sharks to identify and many of our guests have dived with her over the years. We thought it was about time we featured this animal and give you a little more information on this famous and ever popular female shark…..

One of the originals

Lucy was first identified at Guadalupe in 2003 when the first official record keeping of individual sharks began. She was one of the Island’s originals! When she turned up in 2007 interestingly her tail had been injured and has been broken ever since. Nobody knows how or why her tail was broken but it has made this big female one of the most easily recognised sharks on the planet!

Since our team began operating at the Guadalupe in 2010 we have seen her almost every year making her a regular shark for our guests to interact with. Like the big females, she typically turns up around mid October, presumably to feed primarily off the large northern elephant seals which begin to fill up the beaches in the Island’s north east bay.

What is intriguing about “Lucy” is that unlike many of the other big females such as “Scarboard”, “Tzitzimitl” and “Dotty”, she turns up at Guadalupe almost every year. The typical migration trend of the big females sees them returning every two years on a two year round migration. We theorise that the two year migration pattern for the big females has something to do with reproduction…so is it possible “Lucy” is not getting pregnant? and could this be something to do with her tail?

One thing is for sure, she is extremely slow and relaxed when interacting with our baits around the boat. Often seen down deep to begin with, this enormous shark typically takes her time coming up to the surface, almost teasing our ecstatic divers who have been lucky enough to catch a glimpse of this “shark celebrity”. She is also a very dominant shark and due to her presence and size, will often scare many of the smaller sharks away so that she can take her time and inspect our vessel and operation at her leisure.

Why is she such a slow swimmer around the baits? Could this again have something to do with her broken tail or is it possible she is just an effective hunter that prefers to conserve her energy for larger and more fast moving prey?…….For years we speculated about if it was even possible for this injured predator to catch larger live prey, then in 2014 we got the answer……..

During filming for the documentary “Jaws strikes back”, shark scientist and friend Mauricio Hoyos and Greg Skomal placed a tag on another famous shark, “Deep Blue”. This tag also worked as a transmitter that allowed an underwater self propelled ROV to follow her as she swam into the depths. The camera and ROV could however, only dive to a certain depth and would then have to level out and follow “Deep Blue” from above. It was during this time when another shark, (“Lucy”) saw the camera and ROV as prey and attacked the vehicle in the deep. When the footage was recovered, “Lucy” was identified and recored hitting the equipment from below at over 30 mph! This was not only the first evidence that great white sharks at Guadalupe Island attack their prey at depth, but also proved that “Lucy” is a highly successful predator in her own right, even with her injured caudal fin!

An amazing animal and one that we hope to see for many, many years to come. If you would like the opportunity to meet “Lucy” get in touch and book yourself on one of our trips this year! – info@sharkdivingxperts.com

Further information on “Lucy” can be found on our “Meet the sharks” page – https://sharkdivingxperts.com/sharks/white-shark-profiles/