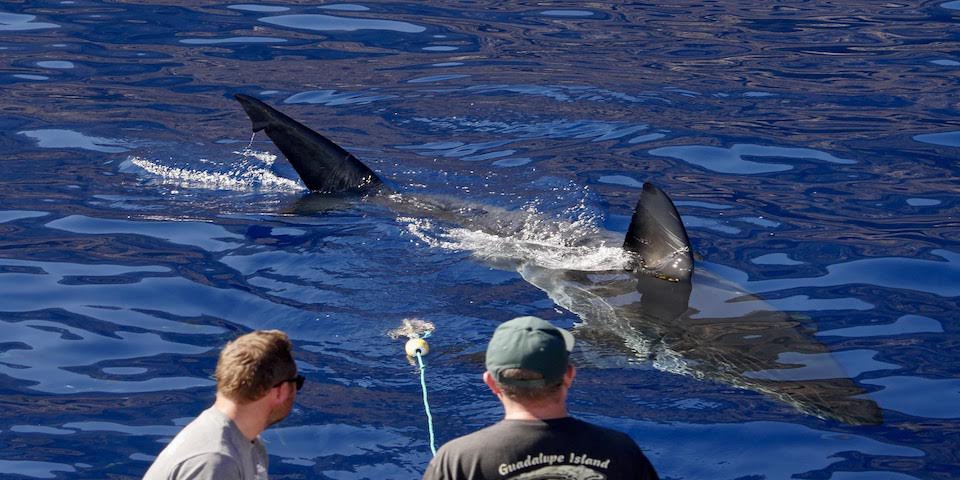 We have now been running trips to Guadalupe for 10 seasons and it has flown by! Over this time we have come to know and grow fond of so many individuals. Some sharks have just been seen on a a few occasions whereas others have been seen almost every single year! Here we look back and highlight some of our favourite and most famous sharks of the past decade.

We began running trips way back in 2010 and the first season at the Island was short, but vey memorable. Hands down the star of these first few years was the famous “Shredder”. From the moment we met him it was obvious to see that this was a very special shark. He was the best performer of both the 2010 and 2011 season however, sadly we have not seen him since those early days. Another big character at this time was “Bruce” and although he has been seen for many more years, he is not sighted with the same regularity as he was back in the day. “Biteface” is another male who is still sighted each year but again, seems to get less interested in the dive boats as time goes on and as he grows older and wiser.

Of the mega sized females, both “Lucy” and “Scarboard” have both been around from 2010 and continue to show up at almost each season with “Lucy” making an appearance last year and “Scarboard” due for a 2020 return. A couple of other big females that we had some great early interactions with (but have not been seen now for a number of years) where “Bella” and “Sarah”, both 17 – 18ft sharks!

It was during these years when our team started to notice a slight “changing of the guard” with some of the older sharks becoming more elusive and some of the younger individuals stepping up and making names for themselves. Classic sharks of this period included “Johnny”, “Heracles”, “Meli”, “Drogin” and “Islander”. These sharks where all around 12 – 14ft in length and very excitable on the baits, gaining a quick reputation and fast becoming favourites with our team.

“Scarboard” and “Lucy” continued their appearances during this period and two other big females, “Dotty” and “Tzitzimitl” both joined the mega shark shortlist. Of course it was also during this time that “Deep Blue” became famous and has since gone on to become known as the most famous shark at Guadalupe, if not the world!

The past few years at Guadalupe have showed no signs of slowing down and have been amongst our best for pure shark numbers sighted. We have now identified over 300 individual sharks and it seems that number grows more and more each season. What is also fascinating at this point is that we have seen many sharks grow each year and turn into fully mature adults. “Screaming Mimi” for example was first sighted in 2016 and was only around 10ft in length. We had some amazing moments with her last year and now she has become an impressive 14ft animal. We will be intrigued to see just how big this shark will get! “Lucy” and “Emma” have also steadily grown for the past few years but instead of growing in length, they get wider each year and grow in girth!

Two younger males are the pick of the crop currently due to their performances around the cages and their surprise attacks on the bait lines. “Geoff”, a 14ft male who likes to sneak out from under the boat to grab our baits and “The Legend” who loves swimming very close to the cages and giving our divers a face to face encounter!

An incredible decade with so many sharks and so many memories. To be seeing the same sharks every single year of course is amazing and great to see that these individuals are surviving out in the wild each year. What is also very promising is the constant arrival of new sharks that we get to know each season. Guadalupe is hands down the best location on the planet for a great white encounter and these are the reasons why. An incredible location, with some amazing shark characters. It has been a privilege to be able to document so many of them and allow for so many people to get in the water and encounter them up close.

As we look ahead to 2020 we are excited to meet brand new sharks and of course keeping our fingers crossed for yet another return of so many of our favourites.

Come and meet the sharks for yourself!